Forms can be completed by clicking on the Add link shown on the participant details section, next to the name of the form. At the top of every form is a banner reminding the user of which participant they are entering data on. Date fields can be completed manually or by using the date-picker that appears when the user clicks on the calendar icon.

Validation checks (e.g. range checking) are carried out on the form to reduce errors. There are two types of error messages - those in the form of popup warning messages and those displayed in red on the form.

Popup message alerts may warn the user of a value that may be incorrect (such as a high blood pressure) or give some other message. The user must dismiss the alert before proceeding. 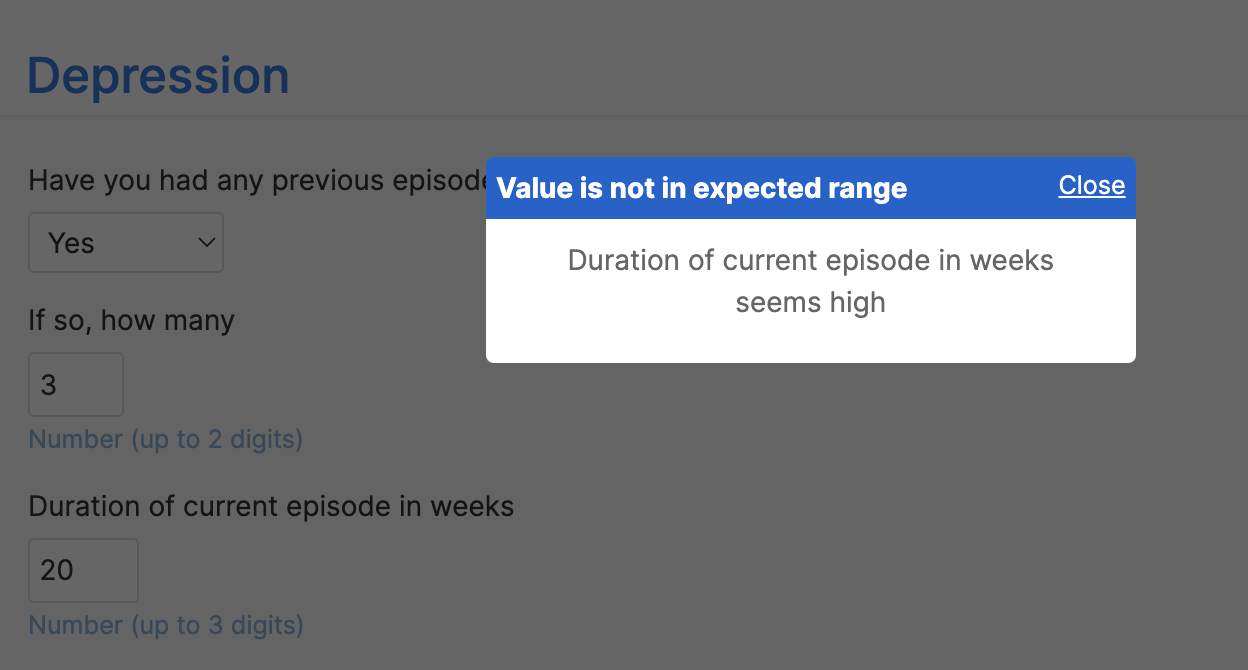 Red error messages require either a change to the value entered or providing a justification for overriding the validation check before proceeding. 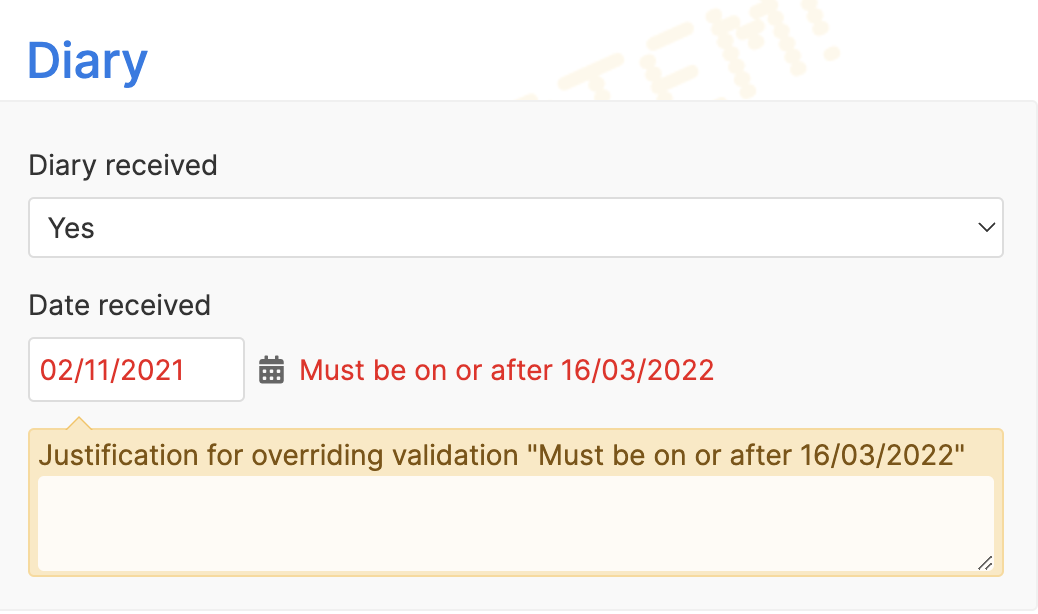 Some fields are always required - these are displayed with an adjacent red asterisk - whilst others may become required or not applicable depending on the answers to previous questions. Other fields are optional and may be left blank if desired.

Some sections of a form can be added multiple times. This is used, for instance, to record all the hospital admissions for a participant. A button, such as Add hospital admissions, will be shown on the parent form. Clicking this button goes to a subform which can be added as many times as necessary. The subforms are saved along with the parent form. 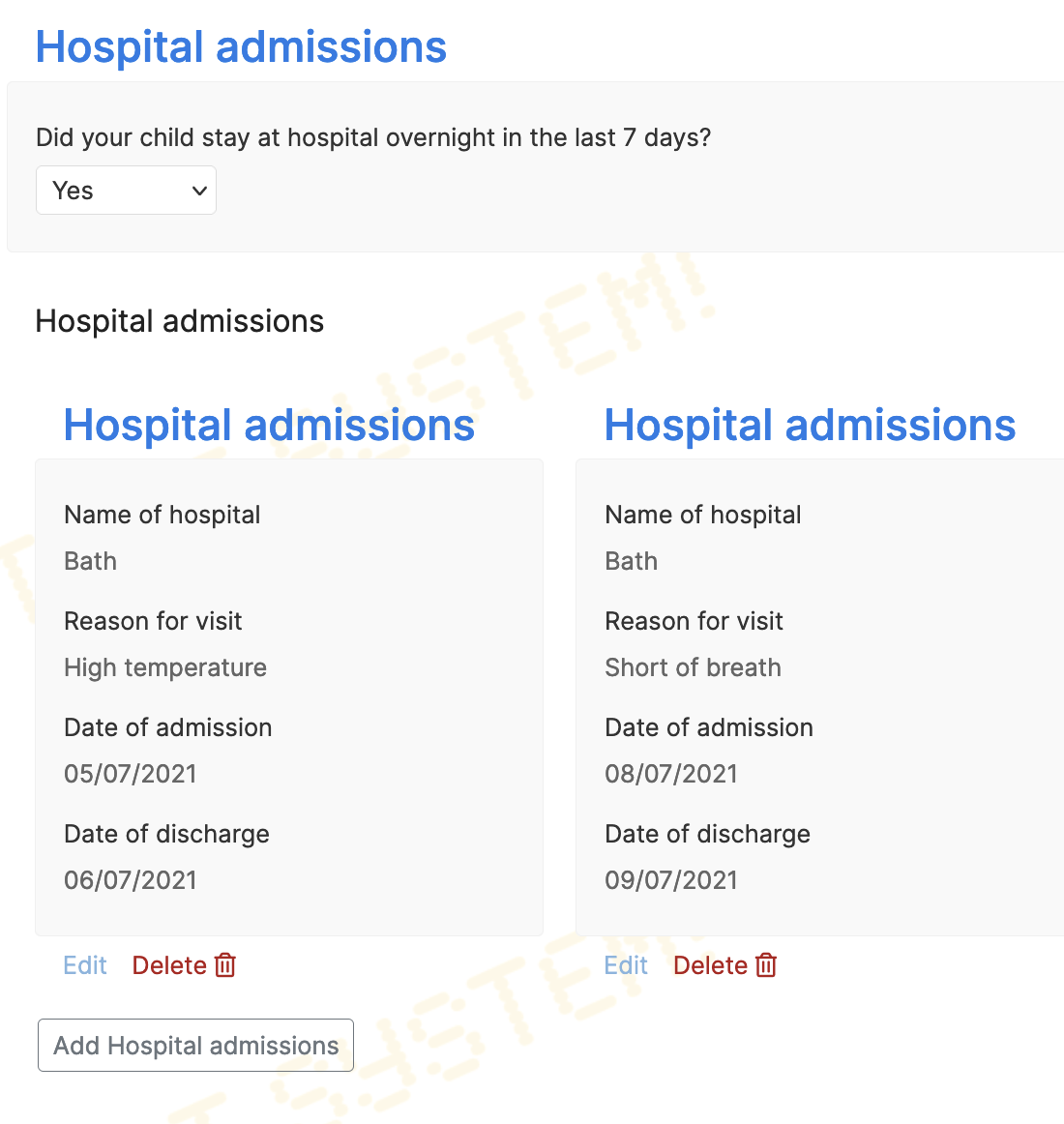 Adding a form with a repeating section for hospital admissions

Sections that capture Likert scale responses are laid out in a grid. Validation and overriding work in the same way as for other sections. On devices with small screens, the options will be displayed as regular radio buttons, as the grid can make the responses too compressed and hard to use.

Likert scale section of a form

Fields containing personally identifiable information (PII) that have been configured in the CRF builder to be stored in an encrypted format are shown with a small padlock symbol below. PII fields can be viewed and edited through the web interface like any other field, as long as the user's role has the View Personally Identifiable Information permission. Role permissions can be seen on the specification page.

PII fields will be in encrypted format when downloaded. Read more about how to decrypt this data after download. 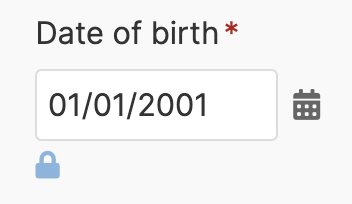 Once the form has been completed without errors, the Save form button will usually present the user with a review page. Here the user can visually check that the data entered is correct and, if satisfied, complete the declaration by entering their password to save the form.

This review step may be disabled for some systems, in which case the data is saved immediately.

If there are errors, the user may return to the previous page to make changes. Once the declaration has been successfully completed, the form is saved to the database. 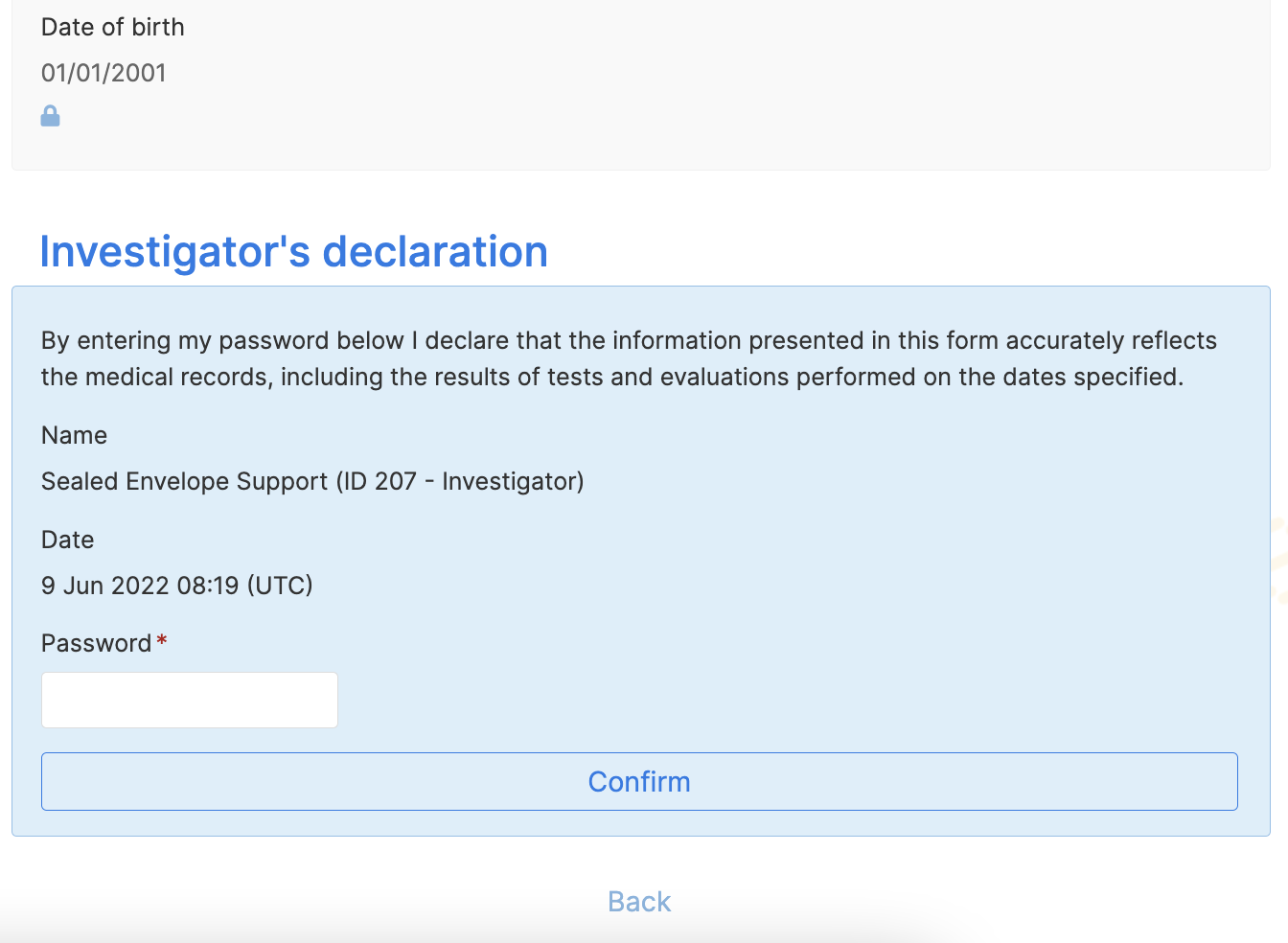 Reviewing a form before saving

Once data entry is commenced, most forms are auto-saved periodically.

Study entry forms (or the randomisation form when participants are randomised into the study) are never auto-saved.
Edits to existing forms are not auto-saved.

A message indicating a draft has been saved is shown periodically at the top of the form. This allows the user to navigate away from the form and return to it later without losing data. When returning to a form that has a saved draft, the user is shown a message and given the option to load the draft data or ignore it. If the draft is ignored and data-entry started again the original data will no longer be available.

There is only one draft per form/participant and it is accessible to all users (not just the author of the draft). 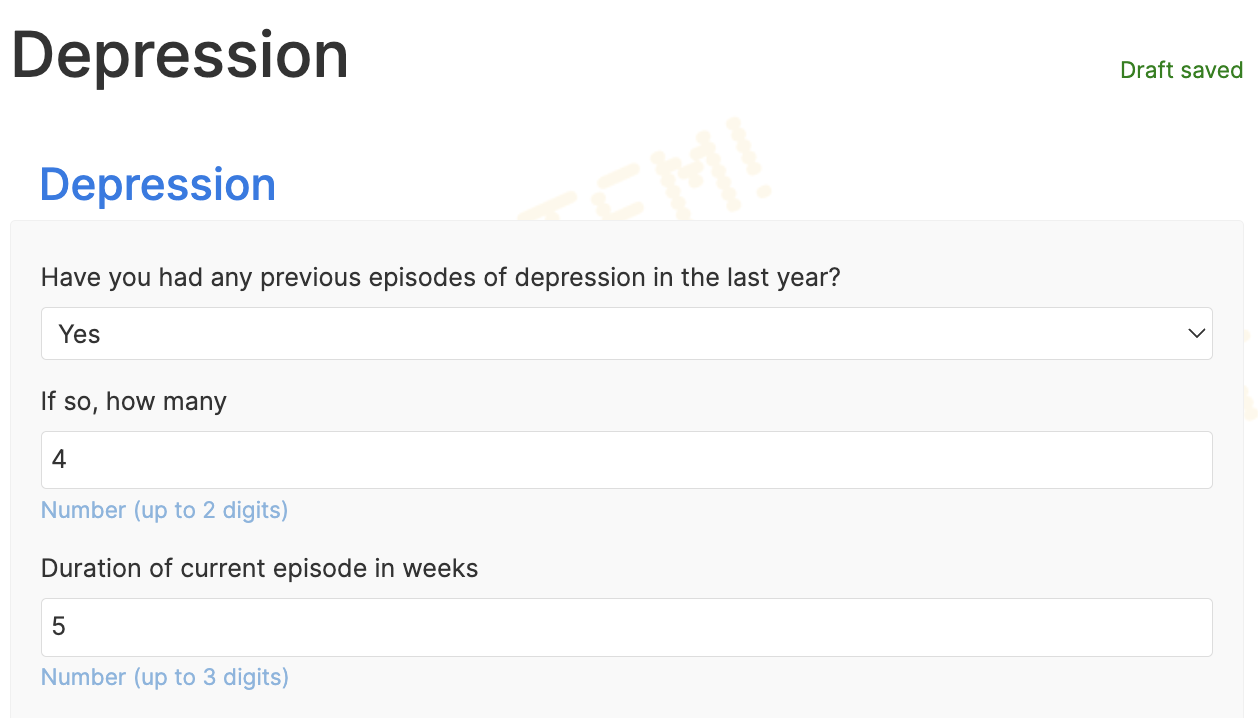 After a form has been saved, the user may be prompted to complete other forms based on the answers they have given. For instance, an event form may be required if a stroke has been recorded. If the form contains any of these rules and they are triggered by the data recorded, the user will see a message asking them to complete the related forms. 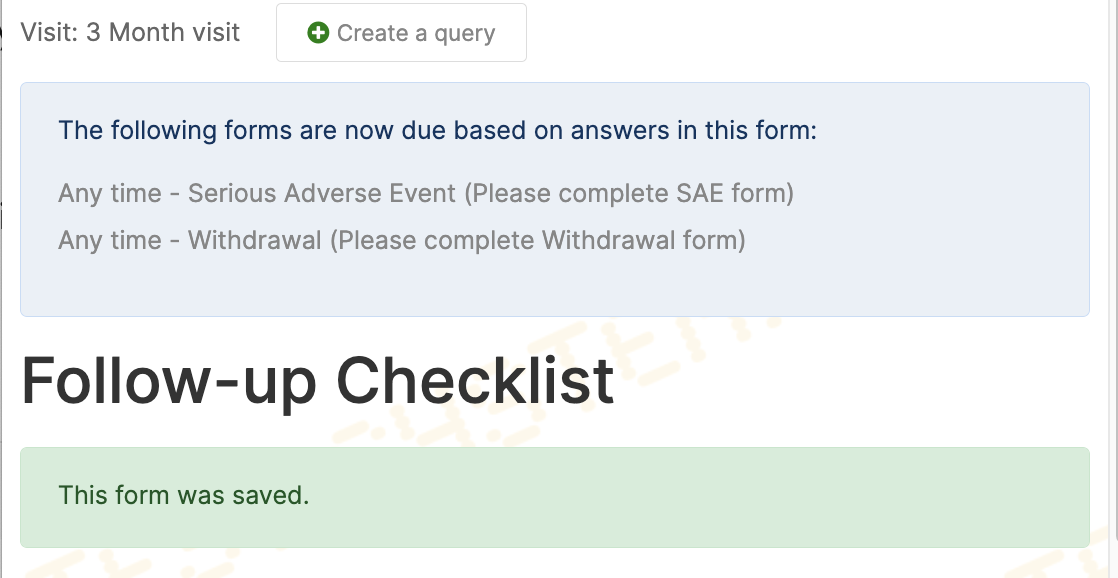 The 'Forms conditionally required' report shows which forms are due based on rules that are triggered when saving a form. The report shows whether the related forms have been completed or not.

An example of a repeating form - the Serious Adverse Event form

Did this answer your question? Thanks for the feedback There was a problem submitting your feedback. Please try again later.